The elite ice hockey league in Finland has reached the playoffs stage and only the best eight teams remain. There were some surprises during the regular season, but none that would rock the boat if compared to Accuscore’s pre-season preview and forecast, where the four favorites remain the favorites come playoffs – albeit in a different order this time.

Not a member? This is the best time to join! Sign up now and you'll get ALL of AccuScore's 2018 Liiga Picks and playoffs predictions, with addition of NHL, KHL and the World Championships as well! JOIN ACCUSCORE TODAY!*

The three teams performing remarkably better than predicted were TPS, KalPa and SaiPa, latter of which pushed through the 1st playoff round qualification. SaiPa was seeded 7th in regular season and beat 10th Pelicans to make it to top eight. Another team making it through the qualification was Ässät, who sent their rivals Lukko to an early summer holidays. The Liiga Playoffs 1st round was exactly as predicted in Accuscore’s preview, with SaiPa going through 2-1 and Ässät 2-0.

TPS took many by surprise under the guidance of rookie head coach and climbed all the way to 2nd in the league. Their veteran players as well as a couple of newcomers impressed and the team from Turku are considered one of the favorites to go all the way – especially after some additions at the trade deadline.

Last season’s runner-up KalPa was considered as outsider, mainly because they lost most of their quality players from last year and changed the head coach as well. But it was all for the better and with a couple of magnificent signings new head coach Sami Kapanen managed to lift his team to 6th in the standings – despite only having one player in top-50 in scoring.

Kärpät won the regular season with a clear margin, after only what can be described as a gap year last season, when they were 8th and ousted in the 1st round. The other teams on top were not that surprising, with Tappara, HIFK and Jyp the regular powerhouses. It’s very unlikely to see any proper challenge from the 7th and 8th seeds SaiPa and Ässät, such is the difference in quality of the rosters.

In Liiga Playoffs 2017/2018 the big favorites are big favorites. According to Accuscore simulations, there’s not much room for surprises and the regular season standings are the perfect reference to how it’s going to look like. But we’ve seen some strange things in the past, like KalPa pushing for finals last season and Ässät winning it all five years ago. Everything’s possible – but not very likely, as we can see: 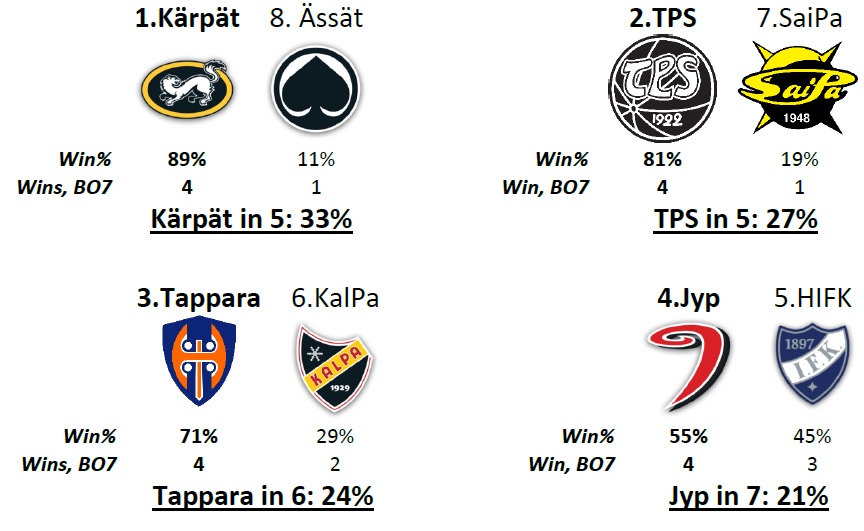 As stated before, we are unlikely to see any big surprises at least on the quarter final phase. The regular season top four are by far superior in quality of players and they’ve proven to have the depth necessary to make a run deep into the playoffs. The challengers – all but HIFK and in some sense Ässät – are all minor teams with very limited assets and for any of the top three to fall in this stage would be somewhat of a miracle on ice.

Ässät has strengthened their team on their way, but unlucky pairing with high-flying Kärpät doesn’t give them much of a chance. Same goes with SaiPa, who were surprisingly good in the regular season considering the quality of their roster, but they’re by no means match for TPS who have gotten stronger up front at the deadline and boast one of the better defensive core in the league. The only doubt is between the pipes, as both TPS goalkeepers Oskari Setänen and Rasmus Tirronen have been rather inconsistent and have little experience in the playoffs.

It gets a tad trickier down the line, with last year’s finalists meeting already in the quarter-final stage. Tappara boasts by far the superior roster compared to KalPa, but they’ve not performed at their best level so far – although they’ve done what’s necessary. They have national team caliber players for four lines and arguably the all-time best defensive grouping. Falling to – with all due respect – mediocre KalPa would be an absolute disaster. KalPa has nothing to lose in this series and tripping a behemoth such as Tappara this season would be an epic feat.

The closest matchup will most likely be between Jyp and HIFK. Both teams have excellent quality rosters and enough depth down the line to challenge anyone. Also, both teams have better offensive options than the defense, although saying their defenses are the weakest link would be a massive overstatement. To counter the slightly lacking defense, both have excellent goaltending duos. Jyp has the edge with home advantage and top-notch offensive players – four forwards in top seven in the scoring race. It will be a hard fought battle though and likely to go to game 7.

Simulating through the whole Liiga Playoffs 2017/2018, we can determine the most likely winner and the runner-up. These simulations provide no upsets and the best team in the regular season is most likely to win it. Last season Accuscore’s Playoff forecast was 100% correct, predicting KalPa’s surprise run to the final as well as Tappara’s eventual domination.

Here’s how the simulations look going all the way in Liiga Playoffs 2017/2018: 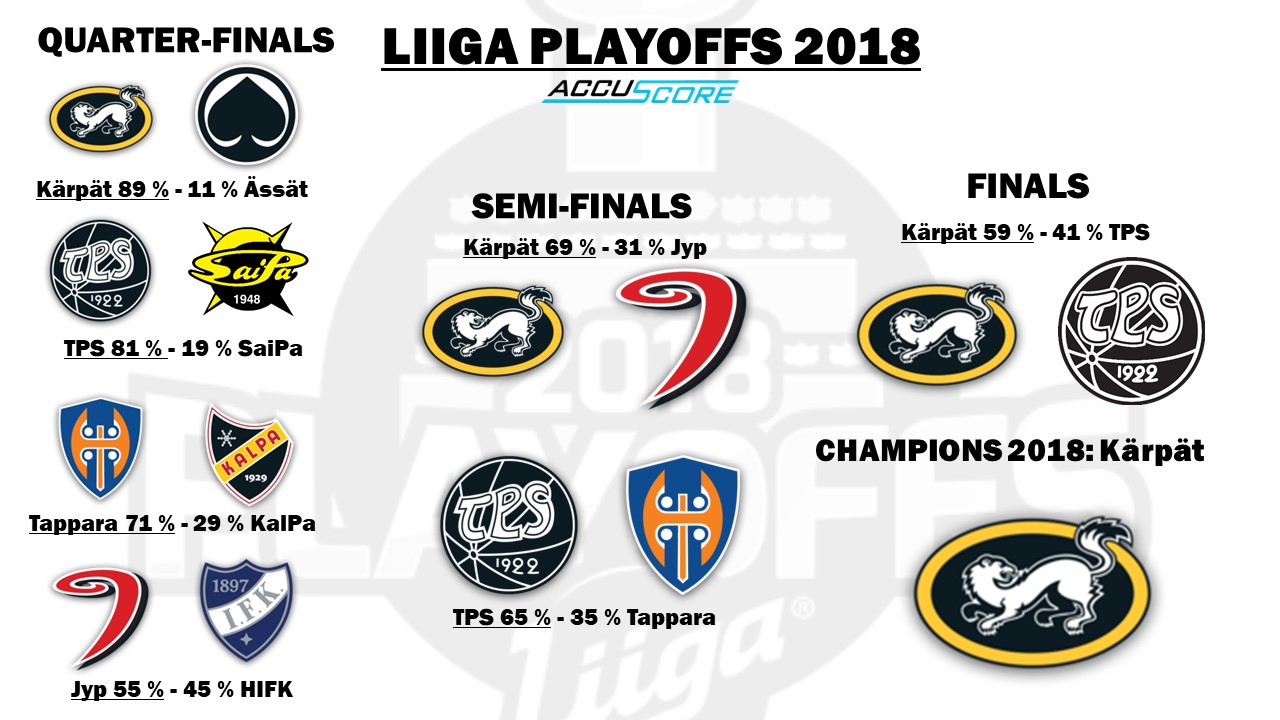 Not a member? This is the best time to join! Sign up now and you'll get ALL of AccuScore's 2018 Liiga Picks and playoffs predictions, with addition of NHL, KHL and the World Championships as well! JOIN ACCUSCORE TODAY!*