The ice hockey world championship tournament starts on Friday in Denmark. The best 16 nations in the world are divided to two groups of eight in the hunt for World Championship 2018. Tournament mode is simple: the teams play one game against each other within the groups and four best teams of each group advance to quarter final stage. In the playoff-stage it’s do or die: win to advance, lose to go home, best of one game.

Accuscore has been extremely profitable in the past international ice hockey tournaments. For the Olympic Games 2018 the overall profit with 100 unit even stake for all the side value bets was a massive +1470 after all 30 games played. Last year in the World Championships, Accuscore made a solid profit of +1016 out of 64 games played. Needless to say, it’s only likely to get better this time around!

The Olympic year usually means the quality of the players for the following World Championship tournament is not exactly top notch. This year makes an exception though, because the NHL didn’t participate in the Olympics and also the Russians had some involuntary and voluntary exclusions to their team. It looks like there’s more quality in each and every roster compared to many previous years.

As usual, Accuscore has analysed each and every game of the tournament beforehand to determine the outcome of 2018 IIHF World Championships. The previews and predictions to all the games can be found from Accuscore.com for the subscribers. If you’re not a member yet, JOIN NOW for limited time offer of -25% all the memberships with a code NHL25!

It is not a surprise that the setup for the tournament is as usual: there’s Canada, Russia and Sweden, followed by Finland, USA and the Czechs. The others play a supporting role, causing an upset here and there (Germany in the Olympics, anyone?) but in the long run the big guns are the big guns. This year doesn’t make a big exception, but there could be a couple of interesting changes in the status quo this time around. Here’s how the simulations determine the group stage to finish up: 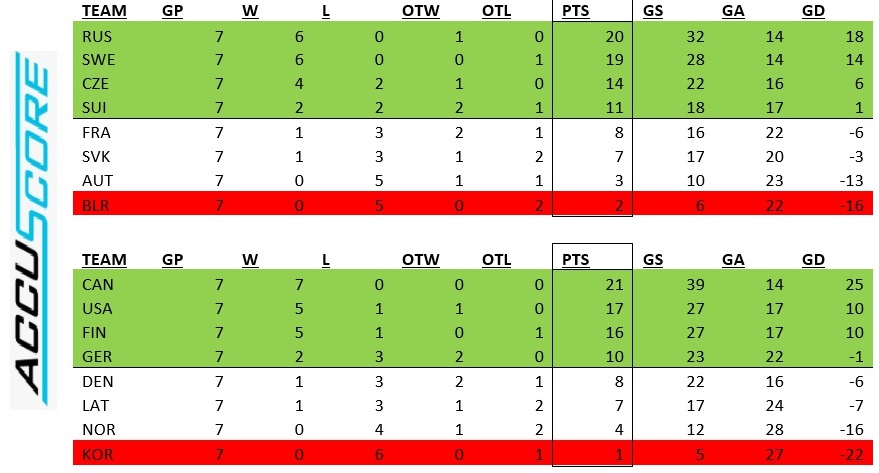 No, Canada is not going to lose. According to Accuscore simulations, Canada is unbeatable in the tournament. This can be explained by just peeking at the roster they ice in Denmark. Led by Conor McDavid, the team is full of talent, speed and especially hunger after short NHL season. The only questionable part is the goaltending, but with such talent all over the ice it doesn’t really matter, does it? The Canadians are by far the biggest favorites to win the World Championship, after losing in the final last year to the Swedes, with a hefty 43% probability.

After taking the Olympic gold with “the Olympic Athletes from Russia”, the current team Russia’s roster might look less impressive – a dangerous misconception. Even if the biggest names like Kovalchuk and Radulov might be absent, the Russian team is full of younger and perhaps even better talent. Already making their name in the Olympic stage, Kirill Kaprizov and Nikita Gusev are back, with addition of NHL household names like Evgeni Dadonov, Artem Anisimov and defender Nikita Zaitsev. And Pavel Datsyuk is back. The Russians will challenge once again and are 17.5% probable to win the World Championship, according to the simulations.

The reigning champions Sweden have once again managed to attract a plethora of top-notch NHL players to join the ranks in World Champs. Especially the defence is loaded with star players and there’s no question which team boasts the best defensive core in the tournament - Oliver Ekman-Larsson, Adam Larsson and John Klingberg are just the tip of the iceberg. Their goaltending is not that good though, but again, it doesn’t matter with that rock-solid defense. Up front Sweden is perhaps lacking the absolute star power quality, but Rickard Rakell and teenage sensation in Sweden, Elias Petterson have enough to be clutch when needed. The quality down the line is excellent and there are no weak links anywhere in the offense either. The Swedes challenge Russians for the second place even keel, with almost precisely same percentages: Accuscore simulations give Sweden a 17% probability to repeat their last year’s feat.

Back in the day the Americans came to Europe after the NHL season to have fun and see the sights. Not so much anymore. The hungry youngsters have come through the national team system and are in the games for real. Team USA is filled with young talent and led by such names as Patrick Kane and Johnny Gaudreu. The big ice in Denmark offers some space for fast and furious Americans and this team has to be taken seriously – is it even possible to stop them if they find their stride? Once again, it’s a young and inexperienced team for the most part, but usually it has only meant good things for Team USA. In Accuscore simulations, they are quite far behind the top trio but hanging right there to go for the jugular when the time comes. In Accuscore simulations, team USA will be hoisting the trophy with 8.9% probability.

Finland has been the biggest disappointment in the past couple of international tournaments, with not much to show for against the top teams. This time around it’s bound to change. Their roster is massively better than in the Olympics, with many of the top players joining in from the NHL. Usually the weakness of Finnish team, the offensive production, is now taken care of by Carolina’s super-duo Teuvo Teräväinen and Sebastian Aho, as well as Mikael Granlund and on-fire Mikko Rantanen. It’s rare to see such talent in the Finns offensive lineup and with additions from European top level players their offense competes that of the other top teams. Alas, the defense and goaltending is not even close to that standard this time around. Not in European level and definitely not in NHL level. Their D is young and inexperienced, albeit potential and skilful with the puck – It remains to be seen if it’s a threat or an opportunity. The goalkeepers have done a good job in AHL, but not much else. In Accuscore simulations, team Finland has the potential to upset the top three, but are still underdogs even against US. Their probability to win the World Championship is 8.8%.

Outsiders with a hunch

The team usually counted into the “big six” of the international ice hockey, Czech Republic is now crudely left outside the contenders’ booth. Reason is that they simply don’t have the roster to match the strength of the other big boys. Consisting mostly of European players and perhaps not even the top level at that, Czech Republic gives too much leeway to their biggest competitors. They do have a fantastic goalkeeper in Pavel Francouz and interesting players such as Martin Necas, but the overall quality somewhat lacks behind. They do have the potential to mix it up though and with a bit of overachievement can beat any of the teams. Accuscore’s simulations indicate a mere 3% probability for the Czech to win the World Championship.

Germany and Switzerland are the closest challengers after the big six, but despite the Germans magnificent run all the way to the finals in the Olympics, the quality of the other teams is now from a different planet. Germany got Leon Draisaitl and Denis Seidenberg to boost their roster, but overall might be worse team than in the Olympics. Switzerland features NHL players Nino Niederreiter, MIrco Muller and Sven Andrighetto but it has not helped before and is not likely to do much now – the overall level of the national team players is still behind. In Accuscore simulations, Germany and Switzerland both have approximately 0.5% probability to win the World Championship.

Everyone is definitely rooting for the hosts Denmark. They have a good thing going for the ice hockey and the fans are, well, fantastic. The home games have attracted NHL players to join, with Frans Nielsen and goalkeeper Fredrik Andersen providing a top-notch duo. They also have a string of good European level players, but the level declines sharply after that. The Danes could compete if the game was played with one line, but since it’s not, even the fanatic home crowd can’t help the redshirts further than group stage. Denmark has meagre 0.2% probability to win the World Champs on their home ice.

France, Latvia and Slovakia should be safe from the relegation battle, but stand absolutely no chance in contest for the playoff spots. Unless one of the better teams has a disastrous tournament, it is seven games and go for golf. By far the worst teams this year are Norway, Belarus, Austria and South Korea. Norway has had some decent teams in the past, but now they are entirely dependable on other teams being even worse. Same goes with Belarus, whose decline has been fast after a handful of quality players are out and their imports getting older. Their luck could be that Austria and South Korea are simply worse, with not much to mention in international level.